In the history of the ISA cricket competition, there have been some great players; Timm van der Gugten, Ben Manenti, Steven Birch and Luke Powell to name a few. They all had an impact on the competition, representing ISA on more than one occasion, and taking the next step to State level. The season of 2018/19 produced another player that could be added to that list, and his name is Ben Mitchell from St Stanislaus’ College. In the two years he has played in the 1st XI for Stannies, games have been won off his own bat. On most occasions he took the attack on, scoring at more than a run a ball, and it was always a mixture of elation and relief from opposing players and supporters when he was dismissed.

In Ben’s first season (2017/18), he topped the ISA batting statistics with 531 at an average of 48.27. He scored two half centuries.  However the highlight of that year was his 169 against St Patrick’s College on the Breen Oval. It wasn’t just the score that was amazing, it was the way he did it. Apart from losing two cricket balls, he scored the runs in just 90 deliveries and it is believed to be the highest score by a visiting player at the Breen Oval.

This season just passed, he made an even bigger impact in the ISA competition, this time with the extra responsibility as Captain of the Stannies 1st XI. He broke more records and was definitely the reason why Stannies was able to taste success for the first time ever in the 1st Division Competition. On his way to breaking the record for total runs scored in a season (738), Ben scored three centuries and three half centuries. The first highlight for the season was against St Pius X at the Chaplin Oval, where he achieved the rare double of five wickets (5/38) and a century (109n/o). He came agonisingly close to having a fourth century when he scored 99 against Oakhill College. His most important innings came in the final, where a true Captain’s knock of 142 (82 deliveries) helped Stannies end their 1st Division drought.

Apart from making the ISA team, he was part of the CIS team that came runner up and was just recently named in the Under 19’s ACT/NSW Country Squad. We wish Ben every future success in his Cricketing journey. 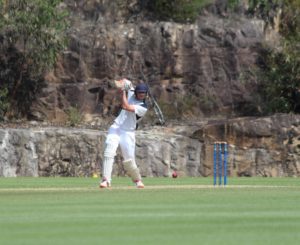