An all ISA Grand Final!

Congratulations to the Central Coast Grammar School 14’s Green Team along with Malaki Mortiss and Riley Njissan-Smith from the 13’s Green Team who won the Kings Cup. The boys were undefeated during the two day tournament that had gym temperatures reaching into the high 30’s. To get to the Grand Final, the boys beat Newington twice, Barker, Knox, Kings and Redlands. 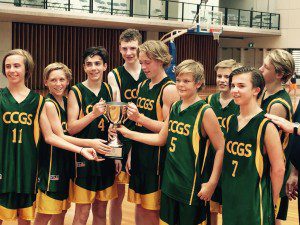